I’ve always had a sweet tooth and it was too hard for me cut products and desserts containing sugar. These cinnamon rolls are my first vegan try as I feel that I need a little change. It’s been just a few weeks since I cut meat products and replaced them with plant products. It’s really interesting to see things differently and actually it’s not too easy to replaced everything as my fridge is full of animal products mostly butter, eggs, yogurts.

You can try this recipe with me. It’s tasty, vegan and without sugar, so also suitable for everyone on the low-carb diet. I think it’s a perfect treat on Sunday. It’s taking a long time to make it but it’s worth!

The biggest challenge could be yeast as it always depends on the temperature and quality of yeats. Make sure the milk is not too hot as it’s killing yeast process. I used xylitol so I could to see that the process of rising was different than with using sugar. The dought wasn’t too rising and the final texture of rolls was different. If you are not on a low-carb diet and you are fine to consume sugar, definitely use sugar as the rolls will be more rise.

Vegan cinnamon rolls for special moments. These rolls are without sugar and gluten. It's suitable for a low-carb diet.
Servings 10 Rolls 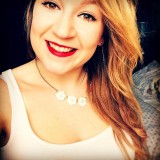 Hi I'm Lea
Welcome on my foodie blog which I created because I believe that FOOD IS LOVE and we all need love, right? I am from the Czech republic but the last 8 years I've been living in North London. I love sharing healthy and sugar-free meals.
I hope you will enjoy this blog and you will try some of my recipes.

Other Posts You May Enjoy Welcome to my foodie blog, which I created because I believe that FOOD IS LOVE. I am from the Czech Republic, but in the last 8 years, I've been living in North London. I love sharing healthy and easy recipes. I am obsessed with baking, reading, listening to podcasts. I hope you will enjoy this blog and you will get some inspiration from my recipes. Enjoy :)